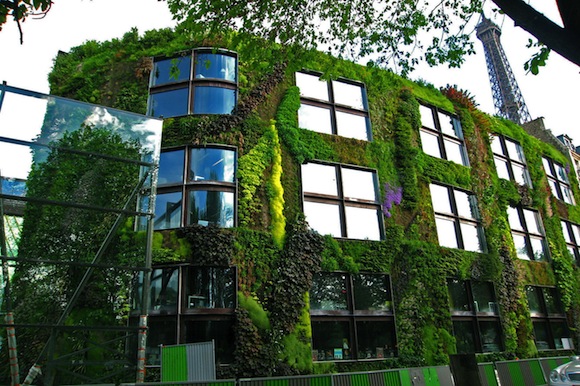 Our modern way of life is centered on megacities. This will continue and the percentage of the global population living in cities will soon rise 80%. We are all looking for greener cities and a healthier life. Urban farming, rooftop gardening, vertical gardens, biological concrete … all offer a vision of an urban architecture with an added layer of sustainability.

The precursor of this interest for giving more visibility to nature in the city is Patrick Blanc, a french botanist working at the French National Centre for Scientific Research, specializes in plants from tropical forest. He is the creator of the Vertical Garden ( Mur Végétal), the first one was made for Cité des Sciences in 1986. Blanc’s gardens are transformative as the flora is constantly evolving. The botanist uses his profound knowledge of plant life, particularly drawing inspiration from flora found in Thailand and Hawaii. He creates patterns of colour mostly with a large green palette. During the first two decades of Blanc’s experimentation, architectural firms showed little interest. It was only decades later, after he had executed a large number of projects for private homeowners, international hotels, museums and luxury brands such as Chanel, that the architectural world has become interested in the potentiality of vertical gardens. One of his most famous creation is for the Musée du quai Branly, Paris in 2004 during an interesting video interview he explains this realization. 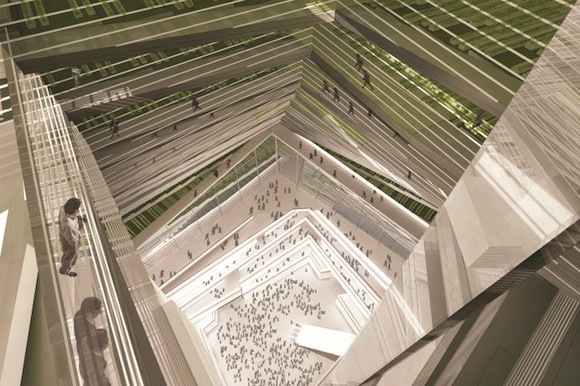 Another idea called “Farmscrarper” could make our cities greener by cultivating plant or animal life within skyscrapers. The idea of a vertical farm has existed since the Hanging Gardens of Babylon. The modern version of vertical farming uses techniques similar to glass house. Dickson Despommier a professor of environmental health sciences at Columbia University in New York City, developed this idea of vertical farming in 1999 with graduate students in a medical ecology class. This might be a solution for feeding people in the future in a “locavore” way. 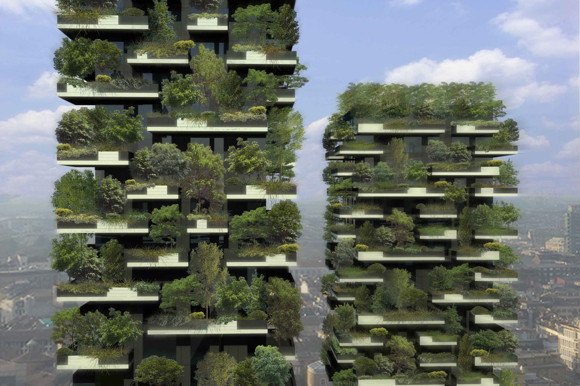 We know that we need trees to keep a breathable air in our megacities. Bosco Verticale – the Vertical Forest – is a project for metropolitan reforestation that contributes to the regeneration of the environment and urban biodiversity. On flat land, each Vertical Forest equals, in amount of trees, an area of 10.000 sqm of forest. Space that you never find in the center of a city!

The first example of this vertical densification of nature within the city is composed of two residential towers of 110 and 76 meters height. Realized in the centre of Milan those towers will host 900 trees. The structure is completed and is currently proceeding with the construction of facades and facilities. The towers run with a system that optimizes, recuperates and produces energy. The diversity of plants produce humidity and a microclimate which can absorb CO2 and dust particles, producing oxygen and protect from radiation and acoustic pollution. The quality of living spaces is improved and energy is saved. Plant irrigation are produced mostly through the filtering and reuse of the grey waters produced by the building. 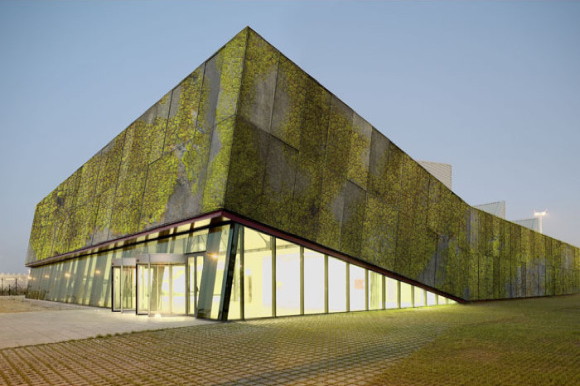 A spanish team of researchers:  the Structural Technology Group recently developed a “Biological Concrete”. This  building material incubates,  encourages and accelerates the growth of a select group of organisms, such as lichens, moss, micro algae, and fungi. The speed at which the concrete fosters it microorganism communities is key: ensuring aesthetic appeal ahead of blotchy buildings was paramount in the researchers concerns.Thanks to the biological cover that grows on the concrete, it acquires thermal, environmental and aesthetic helpful. This concrete has the ability to capture solar energy and CO2, it insulates and regulates the temperature inside the building, according to the species that are installed on concrete, different colors can adorn the facades forming a living painting.

What is exciting with all those innovations is that they create conditions conducive to life. We can  now imagine the green cities of our near future.